Susan tottered down the sidewalk wondering whether she was drunker than she thought or it was the shoes that were causing her difficulty.  The gorgeous and expensive stilettoes did wonderful things for her butt, especially wearing her new skinny jeans.  A new wardrobe was apparently part of the deal, and Erica had excellent taste.  Both Kelsey and she had been supplied with more beautiful clothing than she’d ever owned, even when her parents were well off.  Everything from lingerie to evening gowns had been provided.   In fact, she couldn’t think of an occasion for which she would not have the proper outfit.  Sue especially loved the emerald green cocktail dress Erica had chosen and the long evening gown in gold chiffon.  Kelsey looked so stunning in her black cocktail dress with her golden hair falling down her back that Sue was almost jealous.  The blush-colored gown chosen for Kels made her look like an angel, and really she nearly was, Sue thought.  Good lord, imagine never having an orgasm, she shuddered.  It just didn’t bear thinking about.

Walking close to the building, in case she lost her balance again, Sue rounded the corner, spotted the bookstore about a half a block away and hurried along, careful to keep the heels of her new shoes out of the sidewalk cracks.  Head down, she reached the door, pulled it open with a sigh of relief and proceeded to catch her heel on the strip of metal that ran across the bottom of the doorway.  Pitching forward, she was unable to stop herself, despite her wind-milling arms, and braced herself for the impact.  Instead, a hand slid into the waist of her tight jeans from behind, and all forward motion stopped.  Held in mid-air, she felt like a fish on a hook as she strained to see her savior.  With her hair falling into her face she struggled to get her feet back on the ground, instinctively wiggling.

Susan saw the man drop his packages to the floor just before he wrapped another arm around her waist and pulled her upright.  Still holding her, he gave her a few moments to recover her balance.  Looking up, she brushed back her hair and looked into the bluest eyes she’d ever seen.  The dark-haired man towered over her, a stern look on his face.

“Are you always in such a hurry, or just too preoccupied to watch where you’re going?  You could have been seriously hurt.”

“New shoes,” Sue explained and promptly hiccupped, a hand flying to her mouth in embarrassment.

“Ah, I see,” he said as he observed her blush with a slight sniff, “new shoes, indeed, and maybe a little alcohol to go with them, which seems a dangerous combination.   Why every woman in the country suddenly wants to be six feet tall is beyond me.”

“I don’t want to be six feet tall,” Susan sputtered back, wiggling out of his hold.  “It’s the fashion.”

“It’s ridiculous and accounts for tens of thousands of sprained and broken ankles a year, but that’s beside the point,” he sighed.  “Anyway, are you alright?”

“Yes, thank you,” Susan snapped, slightly annoyed.  What an opinionated jerk, she thought.  A good-looking jerk, an incredibly well built jerk, but a jerk just the same.

“Wow, poor judgment, a bad attitude and a temper.  I bet the men are lined up at your door,” he offered with a laugh.  “See that you slow down young lady,” he admonished firmly, the grin disappearing as if it had never been.  “And get rid of those shoes, especially if you’re going to hit the bottle, before you get hurt.”

“For your information, buddy, I only had a few beers, and I have plenty of men to choose from, if I want one, which I’m not sure I do after meeting you!” Susan insisted, poking him firmly in the chest with her index finger.

“I have no doubt of that, little one.  You’re very pretty…when you’re quiet.  However, I doubt you’ll pick the right one, a man who can give you just exactly what you need.”

“And I suppose you think you know ‘exactly what I need’?” Sue said sarcastically.

“An attitude adjustment,” he replied, bending down to pick up his packages.  On the way back up he stopped at her ear and whispered, “And a damn good spanking.”

Susan gasped as he turned to walk away with a wink.  Pivoting on her heel, she stumbled slightly and heard a laugh as she marched away.  Fuming at his arrogance, she searched for the books she needed and rethought her conversation with Kelsey.  Maybe it wouldn’t be so easy to submit to a man for six months, and that was basically what she was agreeing to.  What if her match ended up being someone like that jackass who just saved her from a nasty fall?   He was good-looking in the extreme, and it would certainly not be a hardship to have a physical relationship with someone who looked and smelled, now that she thought about it, like him.  In truth her panties had been getting wetter from the moment she looked into those eyes. But a spanking?  Why, the idea of him spanking her had her ready to claw and spit.

Sighing, she decided to browse the movie section while she thought about the situation.  One hundred and eighty thousand dollars was a lot of money, and she could live on it for a very long time.  Surely she could handle it for six months, and if he was as handsome as…  Shit, never mind that.  Men like that certainly didn’t have to pay for any relationship.  Women were probably beating down his door on a regular basis.  No, it was best to put him and his threat out of her mind.  Think about what you can do to help Kelsey, she told herself, as she walked slowly up and down the aisle, scanning titles.  Suddenly she spied the perfect movie.  Why hadn’t she thought of it before?  It was just what Kelsey needed.  Picking up the DVD, she headed to the check-out and paid for her purchases.   Walking back to the hotel, Susan took her time.  No point in breaking an ankle, she thought with a grin.  If things didn’t work out with her match, she might have to run, and two good ankles would be helpful. 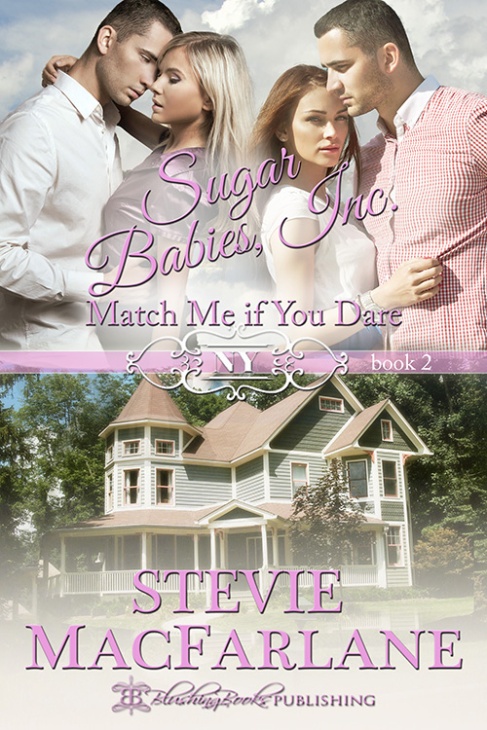